As project teams are pushed to do more in less time while keeping under budget, finding ways to streamline communication among designers, builders, owners and other stakeholders is crucial.

Transportation projects, particularly airports, are about as complex as it gets. Getting facilities operational as quickly as possible, coupled with the need to provide up-to-date project documents to the right teams at the right time, often means the traditional paper-intensive and time-consuming method of printing drawings is not an option.


Many project teams are turning to digital document management solutions to more efficiently manage document sets in the field, enabling massive project teams to communicate in real time and ensure that all parties are referencing one up-to-date, centralized digital master set.

Project Background
The Dallas/Fort Worth International Airport Terminal Renewal Improvement Program (TRIP) poses many of these transportation project challenges for the joint venture of Balfour Beatty Construction, Azteca Enterprises of Dallas, H.J. Russell and Co. of Atlanta and Carcon Industries of Dallas (BARC).

As the managing partner of the joint venture, Balfour Beatty’s top-ranked world-class infrastructure services team is leading the charge to improve efficiency, passenger processing and the aesthetic appearance of the 36-year-old terminals. The team will renovate several terminals and will also build a rail station to connect future routes between local transit systems and the airport. The multi-billion-dollar project scope includes replacing mechanical, electrical and plumbing systems, in addition to improving roadways and infield parking garages. In addition, the terminals under renovation will be gutted to remove existing finishes and to replace data services throughout.

Paper is Not an Option
With so many project partners, plus the expectation of generating 60,000 full-size drawings by the project’s end, creating multiple paper document sets was time- and cost-prohibitive. Many of the teams had already attempted to use paper, resulting in miscommunication and misplaced documentation.
According to Ray Lotten, DFW Airport owner’s representative and TRIP coordinator, “Initially, we started using a paper form, and through the shuffles, we kind of misplaced some forms and had to redo them.” 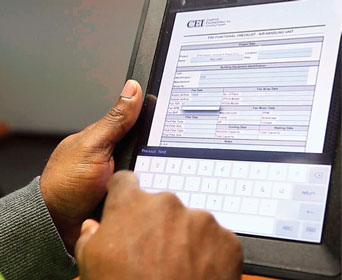 
Setting up a traditional plan room on the jobsite to look at drawings would mean that team members would need to travel several miles back and forth to the onsite trailer from the field and navigate secure jobsite areas, costing even more valuable time. Additionally, staying on top of constant revisions and communicating those changes to field workers in a timely manner would be nearly impossible— since the project’s inception in 2010, there have been numerous changes in scope. Taking the project documentation and workflows into digital media was the clear choice.

Get There Faster
The team not only needed to take drawings digital, but also wanted the system to be cloud-based so that everyone’s ability to access and share the latest information was as efficient as possible.  Several of the partners on the TRIP team, including Balfour Beatty and Prism Electric, were already regular users of the PDF markup and collaboration solution, Bluebeam® Revu®. Having used Revu on other projects with great success, the team was confident that using Revu was the best course of action.

The electronic plan room provides a centralized hub where team members can walk through different schemes and show various sketches to stakeholders as the project moves through each phase. Marking up existing plan sheets within Revu gives a simplified overview of what’s going to happen next.

“Revu gives you a live view of what you can do,” notes Ricky Long, Prism Project Superintendent. “It’s not like working with paper, like we’ve done in the past.”  Prism puts Revu’s overlay tools to good use so users can see all changes to one drawing or all changes between multiple drawings, “…even if it’s one document that’s changed 10 times,” according to Prism Document Control Manager, Justin Jamison.

But with challenges to office trailer and project file accessibility, the capacity to also broadcast the most up-to-date versions of drawings out into the field is critical for coordination and avoiding potential costly rework. Integrated within Revu is the cloud collaboration solution, Bluebeam Studio™, which can be leveraged from a desktop, tablet PC or iPad.

In Studio, users can store an unlimited number of any file type in the cloud and continue work on those files, even when connectivity is lost. Studio also allows project partners to access PDF files in real-time sessions, where users can collaborate on the same documents at the same time for immediate change notification or issue resolution.

Balfour Beatty is hosting about 450 Revu users and has approximately 250 iPads users with the Revu iPad app in the field to access, manage and share project information. The contractor uses Revu’s hyperlinking capabilities to move quickly between drawings, forms and templates to post RFIs digitally for faster, more accurate question resolution, and Replace Pages for slip-sheeting to ensure that all team members are working with the latest drawings.

“One of the least-recognized benefits of a cloud-based system, and how we’re using Revu in that, is that we’re able to slip-sheet the most current drawing into the managed set and we can control what’s seen by the field,” says Ben Bringardner, Balfour Beatty Assistant Project Manager of Integrated Projects. “We are creating a centralized record set that’s being distributed to everybody and we know that they’re not working off an old drawing.”

Real Time, Real Results
“Because it’s real time, having current documents allows us to know what to tell field workers to do and when to do it or what not to do in a certain area,” states Long. “It’s better to have documents firsthand, where we can actually see changes as they come out, and then we can build it or change it and save time and money on the project.”

While Balfour Beatty and Prism championed using Revu on the DFW Airport project, other partners have embraced the implementation. The owner’s team is using Revu on their own set of drawings and, because the team has seen such great results, the designers have also asked for access to their own set of drawings through Balfour Beatty, which Bringardner states, “...is kind of fun.”

Ray Lotten, DFW Airport owner’s representative is enthusiastic about using Revu’s iPad form filling capabilities and eliminating the risk of losing paper forms. “Now, we can form fill in the field and sync those forms back to the cloud. Contractors can fill it out in the field and send it off. We can track who sent it in and when, because it’s time stamped, and we don’t have to worry about keeping up with pounds of paper.”

“Revu played a key role in the middle of the components that make this cloud-based paperless digital system work,” according to Bringardner.  “Without Revu, we wouldn’t have been able to deploy our drawings digitally, and that’s saving the airport about $5M.”

Saving money wasn’t the only benefit to going paperless, however. Having real-time digital access to project documents has helped the team increase productivity, and quickly adapt to changes in project scope - something which is invaluable on a project that’s constantly evolving.