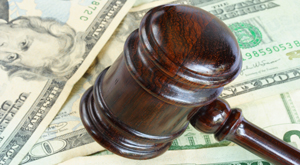 The jurors solemnly filed back into the courtroom.  After seven weeks of trial, it only took only 2½ hours to reach a decision. The courtroom was silent as the clerk read the verdicts one by one on the six matters to be decided. On all six, the jury unanimously awarded the City of Victorville $52.1 million against Carter & Burgess, a large engineering firm. To this day it is the largest verdict in the history of Riverside County, California.

The dispute landed in court after the City of Victorville halted the fast-track design and construction of a 17.5 megawatt co-generation power plant in 2006. Cost overruns had already nearly tripled the original construction estimate. The engineering firm, Carter & Burgess filed suit, seeking $106,000 more on additional disputed invoices. The City of Victorville counterclaimed, contending that the plant should never have been built in the first place.

Although there are many aspects that contributed to the engineers’ liability, at the core of Victorville’s claim was the fact that the engineers ignored existing information. They failed to recognize the importance of actual data in formulating estimates of the revenues to be generated by the sale of electricity and steam from the co-generation plant.  The engineers had also ignored their own internal capital cost estimates when preparing their projections for the City of Victorville to use in obtaining municipal bond financing to fund the project.

Unfortunately, the City had no experience designing building or operating power plants and relied on Carter & Burgess to determine the needs of its customers and properly size and design the electrical plant.

The largest customer for the electricity would be a nationwide dog food manufacturer who had several factories. The Victorville factory would be similar to a “sister” factory located in Tennessee. The Carter & Burgess engineers traveled to Tennessee and gathered the electrical usage or “load” data from the sister factory.

Yet, despite having this historical data, the engineers never used it in the projection of the amount of electricity the new factory was likely to require.  Instead, they met numerous times with the designers for the new factory and obtained inflated estimates from them for the electrical needs of the factory.  Load data is extremely important in estimating the revenue generated from the sale of electricity.  In turn, the projected revenue from the electricity is crucial in determining whether the electrical plant could be economically feasible and how long it will take to pay back the bonds used to finance the construction. If the electrical loads were overstated, the projected revenue will be overestimated and the plant would be a money loser for Victorville.

As the time for obtaining financing for the construction of the co-generation plant approached, the dog food company required that the plant have a 99.99% reliability rating. This meant that the plant must be designed to be off-line for only a few minutes each year.

Because of that high reliability requirement, redundant systems had to be added. The initial capital estimate of $22 million grew to $35 million.

What was never disclosed to the City of Victorville was that the engineers’ own internal estimates of the costs totaled nearly $41 million, not the $35 million that was provided to the city and used for obtaining the bond financing.  Also never disclosed was the actual use data obtained from the sister dog food factory in Tennessee. Had that information been considered, it would have shown the plant would likely lose millions of dollars every year.

Based on the engineers’ inflated estimates of electrical loads/revenues, and the understated capital costs, their proforma analysis indicated that the best option for Victorville was to build the co-generation plant.

Relying on the proformas from its engineers, Victorville obtained bond financing and Carter & Burgess Engineering was able to bill the city $8.2 million for its work in designing and overseeing the construction of the plant.

The dog food factory was completed before the electric plant, so Victorville provided electricity to the factory using rented diesel generators. The electrical load used by the factory from the rental generators clearly established that the factory used about the same amount of electricity as its Tennessee sister factory. The actual load data was well below the projections used in the proforma analysis. The engineers failed to bring this important information to the attention of the Victorville’s decision makers.

As a consequence of poor design and added equipment, the cost to build the co-generation plant required another round of financing. But instead of using the actual loads from the operation of the new dog food factory, the engineers prepared proformas again using the old inflated estimated loads. They did not inform Victorville that the additional funding would not be enough to complete the plant.  Relying on the proformas generated by the engineers, the City of Victorville obtained $22 Million in additional funding, bringing the total to $63 Million.

As soon as the engineers’ own bills were paid following the second round of financing, they requested an additional $30 million of funding to complete the project.

At that time, the City of Victorville halted the project and attempted to evaluate its options. It hired experts who determined that the project would require an additional $50-60 million to bring the project to completion.  The City had no alternative.  The work was stopped and millions of dollars of new, but unused equipment was sold off in order to mitigate the losses.

Engineers and estimators are governed by certain ethical standards in the performance of their work.  According to the National Society of Professional Engineers, “engineers shall acknowledge their errors and shall not distort or alter the facts.”  (NSPE Code of Ethics for Engineers, III, 1(a)).  Furthermore, “engineers shall advise their clients or employers when they believe a project will not be successful.”  (NSPE Code of Ethics for Engineers, III, 1(b)).  The engineers for Victorville’s project failed to meet these standards.

Estimators have their own code of ethics and cannons which provide specific guidance in the performance of their tasks.  Cannon 6 of the American Society of Professional Estimators provides:  “Professional estimators shall utilize their education, years of experience and acquired skills in the preparation of each estimate or assignment with full commitment to make each estimate or assignment as detailed and accurate as their talents and abilities allow.  (3)  … [t]he estimator should crosscheck their own estimate by utilizing a different method such as using the historical data or unit prices based on previous cost data on similar projects.”

As seen in the context of the disastrous co-generation plant for the City of Victorville, the failure to adhere to such basic estimating principles as utilizing historical data from similar projects or providing accurate estimates of capital costs would have likely sent the parties in a different direction and avoided huge losses all around.  At a minimum, the parties would have proceeded with more accurate understanding of the significant risks.

Instead, the engineers in this instance deviated from the fundamental principles of ethical good practices in their relationship with an obviously unsophisticated client.  This is exactly what the jury saw when it awarded the City of Victorville what it requested in damages.

The lessons here are clear and unmistakable.  If a project is not viable, don’t force it forward.  Understand and communicate the best available data and present as many alternatives as prudently as possible.  When new challenges arise in the performance of the work, update/revise the information and keep the client informed.

In February 2013, the engineers paid the City of Victorville $54 Million to settle the matter once and for all.

About the author: The Construction and Public Contracts Department of Gibbs, Giden, Locher, Turner & Senet & Wittbrodt LLP provides legal guidance and counceling to clients at every stage of a construction project. Gibbs Gidden has extensive experience in virtually every type of construction project, including airports, power plants, hospitals, major sports venues, office buildings, correctional facilities, retail locations, major residential projects, universities, courthouses, petrochemical plants, dams, pipelines and wastewater and water treatment facilities. They have represented public and private owners, design professionals, general contractors, subcontractors, and material suppliers with repect to almost every conceivable circumstance that can arise before, during, and after completion of a construction project.

Find them on the web at www.ggltsw.com