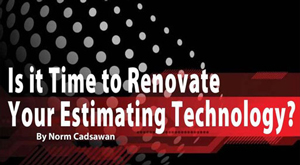 Is it Time to Renovate Your Estimating Technology?


Many companies take on projects that involve modernization of existing structures. Renovation projects tend to be difficult, as they involve a seamless melding of the new structure with the old. Determining the cost on these projects can also quickly become a complex task.

Echo Pacific Construction, a California contractor that specializes in public works construction, handles these challenges with a comprehensive preconstruction planning procedure, and a streamlined estimating process.

Key to Echo’s success has come by understanding the needs of its clients, the intent of the architect, and the cost impact of any project upfront. This allows the contractor’s building team to accelerate the construction schedule and better control costs throughout the project.

The intensity of competition among contractors coupled with a rise in the cost of materials leaves little room for error when it comes to estimating the cost of a renovation project. That’s why Echo Pacific is embracing technology to help them produce estimates more quickly, and accurately.
Great Design – What Will It Cost?

As design-build processes have become more sophisticated, so has conceptual estimating. Estimates are no longer back-of-the-business card “guesstimates.” Today’s conceptual estimates can quickly show how different structural features in a renovation will affect actual costs before sinking valuable time into the design process.

The computer tools used for these “smarter” conceptual estimates actually create different cost scenarios based on user-defined questions about the project. Yet, under the hood of these powerful computer estimating programs are cost models that contain extensive details, such as cost indexing features that factor in geographic cost differences, quantities, materials, crews, equipment, and hours. The result is more accurate estimates up front. These estimates can be further refined as the design process progresses.

Conceptual-to-final estimating applications are especially useful for building owners, construction managers, and facilities professionals who need realistic cost projections for capital budgeting and validation of estimates they receive from their contractors.

Digitizing technology was once widely used to prepare estimates when a design was complete. But the need for paper blueprints or a digitizing board has been significantly reduced recently with the rapid adoption of digital (electronic plan) takeoff capabilities. With this technology, estimators transfer quantities and dimensions directly from 2-D electronic drawings for immediate use in their estimates. Estimators find the speed and visual aspect of an on-screen takeoff more efficient than working with cumbersome paper plans. “The biggest advantage of the technology is the speed with which we can complete accurate estimates,” says Dan Smith, estimator for Echo Pacific.

Estimating is also a key component of building information modeling (BIM). Estimating is known as the 5th dimension of BIM (the 4th dimension is scheduling). BIM has become increasingly popular among today’s designers, contractors, and building owners. A 2012 SmartMarket Report produced by McGraw-Hill Construction showed that BIM adoption has expanded from 17% in 2007 to 71% in 2012. Most usage is centered on 3D BIM design tools, but use of BIM estimating and scheduling capabilities are also rising.

Echo Pacific uses BIM for estimating on its more complex projects. “We start with the Revit model and pull it through 5D BIM software to drive the project estimate,” explains David Freedman, BIM director for the company.
Estimating systems that support BIM link to programs like Autodesk Revit to take off quantities of items needed to for the project and to calculate their cost — down to the last detail. If anything is altered during the design and construction process — for instance, more windows are added, or the flooring material is changed. The program instantly updates the cost calculations of the changes. Cost estimates can be justified through design visualization and assumption validation. And the ability to show owners, in real time, the cost and constructability impact of design changes allows contractors to provide greater value to clients.

Overall, technology advances are improving the integration between estimating programs and other software used in the construction process. In the past, integration may still have required several steps to move data from one application to another. Today, it is moving to a one-step process and in some cases, happens entirely behind the scenes. Some estimating programs, link to scheduling applications — such as Oracle®, Primavera, and Microsoft®.to help set up the schedule. Afterwards, if a change is made to the estimate, it automatically feeds that change into the schedule. Conversely, changes to the schedule will feed back into the estimate.

Construction estimating systems can also share details with other construction-specific applications that support the buyout, purchase order generation, and job-cost tracking processes. So data only needs to be entered once.

Because contractors can pull data directly from the estimating program and use it throughout the entire design and construction process, it becomes much easier to schedule subcontractors and have the proper materials on-hand when they’re needed. Architects, builders, suppliers and others involved in the renovation can work together to ensure that plans are both well-designed and cost-effective. Plans can also be easily modified as needed so projects can be built on time and within budget.

Contractors can also make sure that plans comply with building codes and other regulations, which assures faster inspections and reduces the liability exposure of everyone involved. Such capabilities are becoming increasingly important in an age when buildings are becoming both greener and more complex.

Comparing Past and Present

It’s important for an estimator to be able to compare bids for current projects with similar ones that were done in the past. Today’s estimating programs often have built-in reports or report-creation tools that allow builders to compare estimates, or even portions of estimates, with past jobs, so they can inspect the nuances of the estimates from different angles, such as status and type of work.
Many estimating software programs also allow builders to log multiple bids from subcontractors and suppliers as they change over time. The software keeps a record of these changes and any variables used in making the analysis. Consequently, contractors can price out different scenarios should the scope of the project change, while still retaining the details of the original estimate.

Contractors using modern construction estimating programs have claimed significant increases in productivity. “We have cut the costs involved in generating an estimate by 50 percent and increased efficiency of the estimating process by at least 75 percent,” confirms Chris Rowe, president of Echo Pacific Construction. Estimates that once took four to five days now take the company just four or five hours.

But speed is only one part of the estimating equation. Accuracy is the other critical component. “We are able to give our clients very accurate project funding requirements,” says Rowe. “Not only can we show them an initial budget, but we can project expenses by month. This gives our firm a competitive edge because we are delivering more value to our clients.”

As more construction business owners adopt construction estimating technology, it’s likely that more customers will come to expect it. Moreover, as architects and others who traditionally are upstream in the renovation process rely on it, it will be difficult for builders who continue to use spreadsheet-only or manual-estimating methods to compete. The latest computer estimating technology can deliver a competitive edge to the contractor by adding knowledge and certainty to the project as well as management control to the estimating process. The result: More buildings will be renovated more efficiently and profitably.