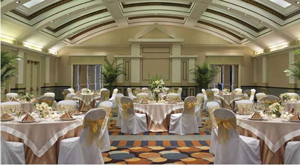 Return of the King-Edwards Hotel - a Design-Build Miracle

The King Edward Hotel was built in 1923 on a historical site owned by Confederate "Major" R.O. Edwards.  Originally known as the Confederate House, this ancient Dixie landmark was destroyed in the Civil War, but rebuilt as the Edwards House. The Edwards House officially became the Edwards Hotel in 1923 and dominated the western edge of Jackson's downtown. The hotel welcomed visitors to the early capitol city as they exited the nearby railway depot. Mississippi Legislators made the hotel their home while they were in the capitol. It became the place where businessman met, where politicians mingled with high society, and where lavish weddings and dances were held. The Edwards Hotel was the epicenter of Jackson's lush social and political life for over 40 years.

Designed by New Orleans architect William T. Nolan, and as built in 1923, the hotel was in the Classic Beaux Arts style, featuring archetypal curves, arches and intricate carvings on the facade. Things really took off in the 1950s, when the hotel underwent a name change and interior renovation. Soon the "King Edwards Hotel" sign graced the Jackson skyline, an escalator was added to the lobby, and an elevated pool added to the rear of the building.

Unfortunately, within a few years of becoming "king", the hotel fell onto hard times. Some say it was a decline in urban hotels, others claim it was integration, but, whatever the reason, the hotel finally closed in 1967. The once- beautiful building fell from grace: Vandals knocked down interior walls and tore out plumbing and electrical wiring. Walls soon became covered with graffiti, windows were broken out, and copper flashing and trim were removed and sold for scrap.

There were fires in numerous locations where vagrants had camped and cooked and, perhaps worst of all, the basement flooded. The water, which reached a depth of over five feet, remained like a putrid swimming hole in the basement for decades. That murky brown water penetrated all the major portions of the original structural steel and flooring systems, rusting the reinforcing and threatening the building's structural integrity.

In addition to repairing the damage, any renovation or restoration of the King Edward would require complete asbestos and lead paint abatement before work could begin. And since the building is on the National Register of Historic Places, any work would have to comply with requirements of the National Park Service and the Mississippi Department of Archives and History. The challenge was heroic, maybe epic, and definitely not for the faint of heart.

Up for the Challange
With substantial experience in revitalizing urban areas by reimagining historic structures as appealing places to live and work, New Orleans-based HRI Properties was willing to take on the massive renovation project. HRI's architectural group, HCI Architects, created a concept for renovating the historic hotel's floor plan, including the new services the building's owners and managers would ultimately need. HRI chose Hilton Garden Inn as the hotel's flagship and provided the company with design guidelines. To bring the concept to fruition, HRI chose Clayco Inc., negotiating with them exclusively, building on a string of successful design-build projects they had partnered on in the past.

It wasn't only past performance that led HRI to choose Clayco as the design-builder. Clayco followed HRI's conceptual design, proposed floor plans, and provided an apartment-design manual and proposed improvements, adding more efficient floor plans for both the hotel and apartment areas. Clayco also suggested design efficiencies such as consolidating the MEP system risers and routing them within the building. The company also offered new solutions on how the building could include contemporary amenities and meet modern code requirements that would seamlessly fit into its classic historic character.

Beyond the need for modernity and efficiency, the final result of the renovation had to be beautiful and true to the building's Classic Beaux Arts style. Again, Clayco brought its experience to bear. Its unique knowledge of specialty products and custom finishes helped create confidence in its ability to deliver a project that combined the King Edward's original charm with modern upgrades.

Because of the project's historic nature and complexity, a permitting process that would normally take 30 to 60 days took 100 days to complete. Even Clayco's past experience with historic projects couldn't shorten the time frame, but preparation work was done while waiting on the permits.

Working Efficiently
For example, the hotel's grand ballroom featured elaborate columns, decorative beams and skylights, many of which could not be salvaged. Recreating the plaster columns would have been prohibitively expensive and time consuming. As an alternative, the team took casts of the remaining columns and used them to produce glass-fiber-reinforced gypsum recreations. The same method and material was used for decorative beams and cornices.

Skylights were replaced with backlit false skylights, which are less expensive to construct and easier to maintain. The original two-story, marble-floored oval hotel lobby was retained, along with the adjacent penny-tile floors. Both were carefully protected during construction and restored, maintaining an important historical feature while saving time and money. Plaster experts re-created moldings for intricate architectural details and stone was imported from Portugal to match existing features.

The team, including subcontractors, met early to work out solutions to the problems they anticipated, but-as is often the case with older buildings-unexpected challenges emerged. The team soon discovered subsurface structures that didn't appear on any of the plans. Soil and water-table issues posed additional challenges. The basement had to be completely drained, repaired and kept dry. An adjacent space designated for a new parking lot turned out to have massive grade beams under the existing structure that couldn't be removed. The team reworked the grades to quickly solve the problem.

Innovative Ideas
The ability to solve issues on the fly was crucial to the project's success, but the design-build team's innovations also became essential. For example, the team worked with a window manufacturer and a sound consultant to develop a system that mitigated noise from a nearby rail line.

In addition, the contractor working on the drain lines for the basement devised an innovative method to dig trenches deeper so he could install under-slab drainage systems below the plumbing drainpipes, reducing the number of cuts in the floor and avoiding more groundwater problems. In digging the hotel's pool, the team expanded on the job, using the equipment to install a deeper drainage system in the middle of the building.

To deal with the humid Mississippi climate, Clayco specified breathable walls instead of vapor barriers on the external walls and vinyl coverings on the interior walls. The team used existing structural elements such as support columns and risers in the basement whenever possible. And, although many had suggested removing the roof and top floor, Clayco was able to keep both, preserving the hotel's original appearance, and saving HRI more than $350,000 In addition, this move ensured rental income from the 16 apartments resting under that roof.

This amazing team brought successful solutions to a plethora of problems and still managed to complete the renovation within budget and a month ahead of the contracted completion date.

The project has since been recognized by the National Trust for Historic Preservation with a 2010 National Preservation Honor Award. In addition, DBIA awarded the King Edward Hotel and Residences its 2011 Design-Build Merit Award in the Rehabilitation/Renovation/Restoration category.

"The project required innovative thinking at every level, and Clayco's team delivered," said Ron Silverman, HRI Properties, senior vice president and regional manager, in a letter supporting the project's nomination. "Despite these challenges, Clayco maintained the rigorous schedule we had set and even surpassed our expectations, allowing us access one month ahead of schedule."

Todd Rich is a contributing editor to IQ as well DBIA's web and graphics systems manager.

The Design-Build Institute of America is the only organization that defines, teaches and promotes best practices in design-build. Design-build is an integrated approach that delivers design and construction services under one contract with a single point of responsibility. Owners select design-build to achieve best value while meeting schedule, cost and quality goals. Find out more at www.dbia.org